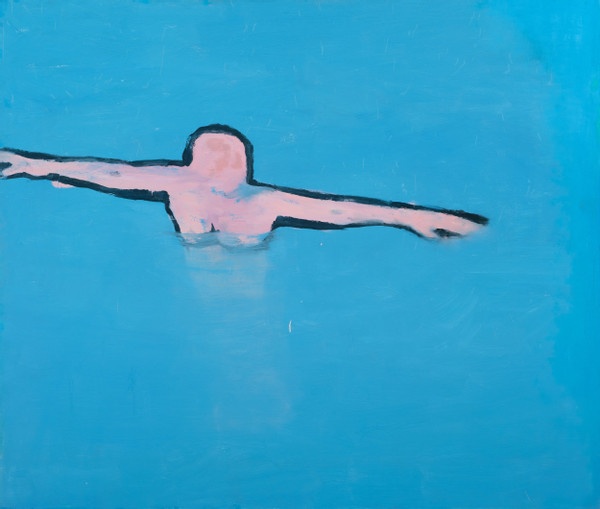 The Portland Museum of Art hosts Flying Woman: The Paintings of Katherine Bradford, the first solo museum survey of the painter’s work.
Bradford’s figures, who often defy society’s expectations of women and all genders, serve as surrogates for a mother, painter, and lesbian coming of age at the turn of the 21st century. The performance of paint on the canvas—her modus operandi—activates her characters who collectively chronicle her life and present universal themes of humanity as they float, swim, dive, and commune in candy-colored cosmos of ethereal abstraction and terrestrial routines of daily life.

Flying Woman highlights Bradford’s ongoing commitment to abstraction, figuration, and color. She is widely applauded for her vibrant palette, eccentric compositions, and her approach to narrative and figurative painting in a wholly personal, unpredictable way. Organized chronologically from 1999 to the present, the exhibition explores her bathers, swimmers, superheroes, friends, and strangers for the very first time.

Consisting of approximately 40 paintings, Flying Woman offers an intimate presentation of the artist’s oeuvre and properly positions Bradford as a key figure within the canon of American painting from the late 20th century. The PMA and Rizzoli are co-publishing a fully illustrated catalogue that will feature scholarly essays by curator Jaime DeSimone and art historian Nancy Princenthal, as well as an artist-curator interview.

Organized by the PMA’s Robert and Elizabeth Nanovic Curator of Contemporary Art, Jaime DeSimone, the exhibition will premiere at the PMA in summer 2022 and then travel to the Frye Art Museum in winter 2023.

More information about the artist

Fill in the form below so that we can contact you with more information about this work.